(Editor’s note: Last issue, we looked at the evolution of SCI from its beginnings through the decade of the 1970s. This issue, we check out some of the high points of the 1980s. Safari Club International will celebrate its Golden Anniversary in 2021. The 50th SCI Convention will be held in 2022, which means there will be two opportunities to celebrate in the near future. Safari Magazine will publish articles in all of the issues leading up to these historic years, outlining how the organization evolved from its inception until now. Truly, there is much to celebrate and many reasons for members to be proud of what SCI has become and what it promises to be in the future.)

The 1980s saw SCI expand in some ways and experience growing pains in other areas. It was the decade when SCI really became of age.

Early in the ‘80s, much of the focus was on Safari Club International Conservation Fund, which acquired the Granite Ranch property in Wyoming.

Granite Ranch has been the location for the American Wilderness Leadership School since. The Sables were formed in 1984 and in 1987, SCICF became involved with Becoming and Outdoors Woman.

Since then, the Sables have been the education arm of SCI/F and the leaders in promoting education as a means of helping assure a bright future for hunting. For details about the evolution of both Sables and AWLS, see Spencie Netschert’s article that starts on Page 24 of the November/December issue of Safari Magazine.

On the SCI front, the early 1980s were tumultuous. In 1982, a move by the Board of Directors called the “Dearborn Resolution” caused a shakeup that saw numerous chapters pull out of the organization. 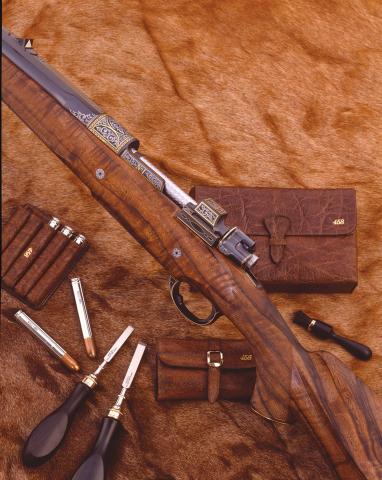 The Dearborn Resolution required chapters to send 30 percent of the profits from their annual fundraisers to SCI Headquarters. This then-controversial resolution happened during the SCI Spring Board of Directors meeting held in conjunction with the International Wildlife Foundation’s Film Festival in Dearborn, Michigan.

The passage of the 30 percent rule, however, led to nearly 20 chapters quitting the club in protest, including three of SCI’s largest – Dallas, Houston and Sacramento. Within a year, all of the other chapters returned to the fold. Sacramento stayed away until 1991. Dallas and Houston sill are not affiliated with SCI but are freestanding organizations: Dallas Safari Club and Houston Safari Club.

Mac indicated in 1983 that he was thinking of retiring, and in June 1985, he agreed to meet a group of supporters and dissenters in the Minneapolis, Minnesota airport to work out a retirement settlement that would become known as the “Minneapolis Accord.”

Mac signed the agreement that he would stay on until the end of the World Hunting Congress, but when the Congress ended in January 1988, Mac changed his mind.

There followed a number of negotiations, and by the end of the decade, that chapter of SCI’s history was closed. Bottom line: Mac was 75 years old when he walked away from SCI and was 83 when his contract ran out in 1995.

During the 1980s, SCI singlehandedly elevated the value of custom firearms around the world when it kicked off the SCI Big Five Classic Masterpiece Collection of rifles at the 1982 Convention. Each year for five years, the amount paid for a Big Five rifle went up, from $41,000 the first year to $201,000 the fifth year.

David Miller of the David Miller Co. in Tucson, Arizona came up with the idea of commissioning other master gunmakers to create five one-of-a-kind rifles, each to commemorate a separate dangerous African big game animal.

Each rifle would feature the finest engraving, gold relief and gold line work based on original oil paintings by well-known artists who supported SCI. Each would be fitted in a one-of-a-kind exotic wood and leather case, complete with appropriate accouterments, and each gunmaker would sign a certificate of authenticity guaranteeing the purchaser that the rifle would never be duplicated.

Since David Miller Co. was instrumental in creating the project, they would build the first and last rifle. The David Miller cased rifle set the standard for the other three gunmakers. The first rifle in the series, called “The Elephant Rifle,” was based on a square-bridge Mauser action and chambered in .458 Winchester Magnum. It sold at the 1982 SCI Convention for $41,000. That was the highest price ever paid for a modern bolt-action rifle at the time.

Rifle Number Two, called “The Rhino Rifle,” was built by Champlin Firearms, Inc. of Enid, Oklahoma. The receiver was built entirely by Champlin and the octagon barrel was chambered for .375 H&H. That rifle brought $43,500 at the 1983 SCI Convention.

Rifle Number Three, called “The Buffalo Rifle,” was built by the Friedrich Wilhelm Heym Company of Germany. It was a side-by-side double rifle based on a Heym Model 88BSS action. That rifle brought $65,000 at the 1984 SCI Convention.

Rifle Number Four, called “The Lion Rifle,” was built by Paul Jaeger, Inc., of Jenkintown, Pennsylvania. It was built on a pre-1964 Winchester Model 70 action and was chambered for the .375 H&H cartridge. That rifle brought $140,000 at the 1985 SCI Convention. Rifle Number Five, called “The Leopard Rifle,” was made by The David Miller Co. of Tucson, Arizona. It was based on a redesigned Model 70 action that Miller helped design with U.S. Repeating Arms Co. – a redesign that now is known as the Winchester Model 70 Classic action. It was chambered in .338 Winchester Magnum. That rifle brought $201,000 at the 1986 SCI Convention. SCI formed its first official Government Affairs Committee in 1980, and 27 of the 39 candidates supported by SCI-PAC in the 1980 elections won their races.

June, 1986 was the first annual Awards issue of Safari Magazine, which since has promoted SCI’s world hunting awards programs.

The International Wildlife Museum opened in February of 1988 and served as SCI headquarters until they were moved to Washington, D.C. in 2018.

In the next issue of Safari Magazine, we’ll look at the decade of the 1990s as the organization matured and prepared for the new millennium.–Steve Comus